A Call to Order 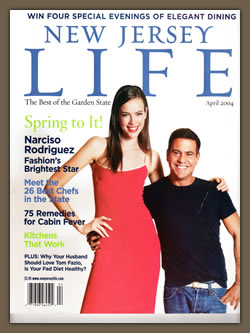 A shot of Normandy and a dollop of England, topped off with a dash of Monticello, made for a classy but cozy renovation of an old New Jersey mansion. Located in the so-called Mountain Colony of Somerset Hills, the house was designed by Arthur C. Jackson and built in 1938 on top of the highest mountain in Bernardsville. As seen from the front, framed by twin turrets, the brick slate-roofed house, with white shutters, embodies the always-surprising diminutiveness of traditional Norman chateaux.

Its modest aims attain infinitely more elegance than the bloated pastiches so common today; a newly minted one, in fact, looms directly, and unfortunately, across from the entrance of the older home.

Happily, the house’s focus is to its rear and one side, with a mix of pastoral formality and wooded depths. And indeed, interior designer Jeffrey Haines, working closely with architects William Welch and Andrea Phillipone of Tendenze Design and landscape architect Walter Carrell, paid a great deal of attention to directing the eye to paths flowing through the interior and out into the exterior space. 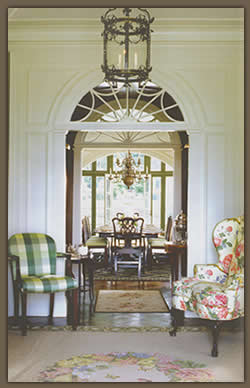 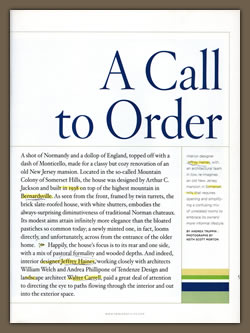 This connection between inside and out seems to enlarge the interior spaces as well as lend them an order – an essential part of the redesign program, which called for opening and simplifying a confusing conglomeration of seemingly unrelated rooms. The house was also divided, as was typical for the era, into distinct living areas for owners and servants. The new owners, a family with high school – and college-aged children, wanted the house to embrace their more informal lifestyle.

The kitchen, once reserved for the cook, was redesigned as the center of family life. The large space, originally consisting of several smaller rooms, including a separate breakfast room to the east, was opened to fill the entire depth of the house, yet it retains several distinct areas that invite different activities: a working fireplacewith a seating area delineated by the addition of wood ceiling beams; an informal dining or breakfast area in center; and a comfortable lounge space next to the bay window to the east. The kitchen’s materials, including dark-wood floors, cream-colored lacquered wood cabinets and a collection of blue and white china, are warm and welcoming. 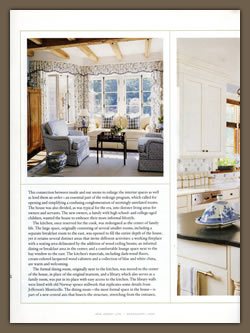 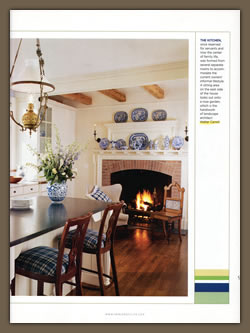 The formal dining room, originally next to the kitchen, was moved to the center of the house, in place of the original tearoom, and a library, which also serves as a family room, was put in its place with easy access to the kitchen. The library walls were lined with old Norway spruce millwork that replicated some details from Jefferson’s Monticello. The dining room – the most formal space in the house – is part of a new central axis that bisects the structure, stretching from the entrance, through the foyer and an arched vestibule, to the back of the house where the dining room is. French doors open onto the formal garden where stairs lead through a terraced lawn to the pool.

Wood was used extensively to warm the interior, with the original marble floors replaced by parquet made of old hickory wood from Pennsylvania. In the living room, floor-to-ceiling wood paneling around the fireplace replaced the small marble mantel that Haines considered under scale for the large space. He also installed wooden beams from an old barn. Although, historically, those who could afford to bury their beams in plaster did so, the raw woodbeams were used to warm up and scale the large space with no pretense of structural necessity: They are clearly supported by a new molding that runs along the room’s perimeter. 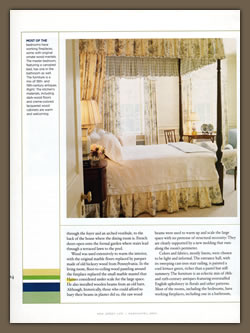 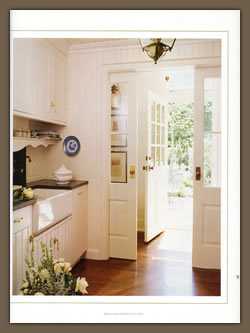 Colors and fabrics, mostly linens, were chosen to be light and informal. The entrance hall, with its sweeping cast-iron stair railing, is painted a cool lettuce green, richer than pastel but still summery. The furniture is an eclectic mix of 18th-and19th-century antiques featuring overstuffed English upholstery in florals and other patterns. Most of the rooms, including the bedrooms, have working fireplaces, including one in a bathroom, some with original ornate wood mantels, others with newly designed ones.

Upstairs, a new connection was made between the original servants’ living quarters and the bedrooms, but the space suffered from a long, dark hallway that runs the length of the house. The designers added a sense of scale with repeating arches, molding and chair rails, and lightened the space with a series of pendant lights. The hallway is on an axis with a new allee on the south side of the house, cut through the towering trees of the adjacent woods and ending at a statue of St. Michael. Low boxwoods planted at their feet emphasize the trees’ loftiness. The allee visually extends the hall’s axis through its southern window. 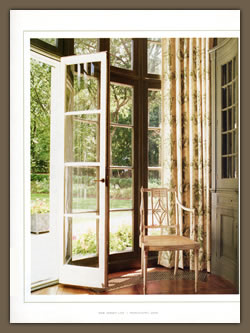 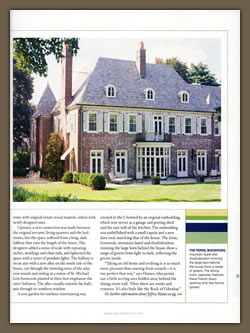 “Taking an old home and evolving it is so much more pleasant that starting from scratch- it is too perfect that way,” says Haines, who points out a little serving area hidden away behind the dining room wall. “Here there are nooks and crannies. It’s also built like the Rock of Gibraltar.”