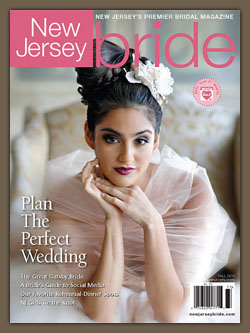 When two professional politicos plan a wedding, no detail is left undone. Michael Drewniak, press secretary to Gov. Chris Christie, and Nicole Davidman, the governor’s campaign finance director, had orchestrated their special day to the hilt: gorgeous venue, important roles for family, stunning décor. Then along came Sandy, as Michael and Nicole were planning to get married on Saturday, October 27, 2012, at the Bernards Inn in Bernardsville. Storm warnings turned dire, and staffers were preparing to move into emergency headquarters. So, what did Christie say to his chief spokesman as the storm drew near? “He said, ‘Get out of here. It’s your wedding,’” Mike recalls. “We wound up relishing a lovely night in a beautiful place, and everyone recognized it was a great way to spend one of our last nights before this horror hit New Jersey.”

Mike, 51, has worked with Christie since his tenure in the U.S. Attorney’s office. When Christie announced his first gubernatorial campaign in 2009, Mike attended the speech and introduced himself to Nicole, 30, who had been building a reputation as a savvy fundraiser. “That didn’t really go anywhere,” Mike laughs. They met again in August 2010 at lunch, which turned into a first date that same night. 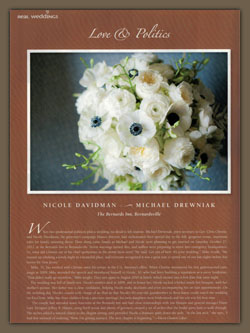 The wedding was full of family ties. Nicole’s mother died in 2009, and to honor her, Nicole tucked a locket inside her bouquet, with her mother’s picture. Her father was a close confidante, helping Nicole make decisions and even accompanying her on hair appointments. On the wedding day, Nicole’s cousin took charge of an iPad so that Nicole’s 85-year-old grandmother in Boca Raton could watch the wedding via FaceTime. Mike has three children from a previous marriage; his twin daughters were bridesmaids and his son was his best man.

The couple had attended many functions at the Bernards Inn and had close relationships with Jon Hanson and general manager Diane Carr. Designer Jeffrey B. Haines, using birch wood and plenty of greenery, created a set of arches that the bridal party had to walk through. The arches added a natural charm to the elegant setting, and provided Nicole a dramatic path down the aisle. “At the last arch,” she says, “I had that moment of realizing, ‘Wow, I’m getting married. The next chapter is beginning.’” 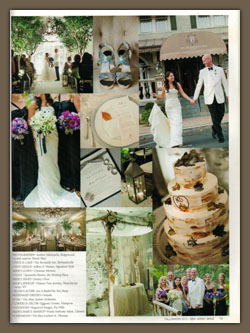 
Link to the original article 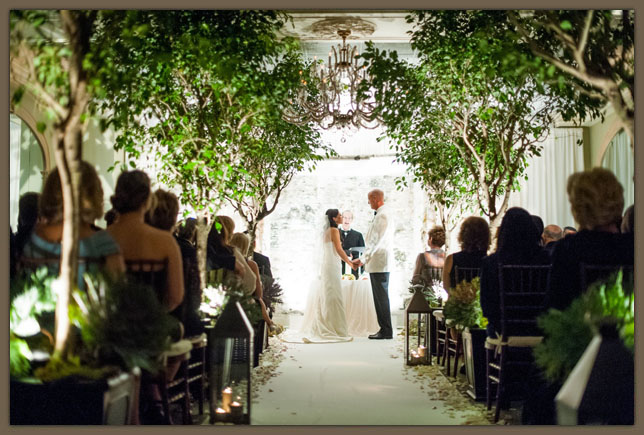